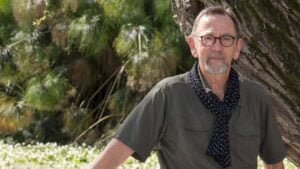 Dave Pepler is a well-known South African environmentalist. After growing up in Robertson in the Western Cape, he attended the Saasveld Forestry College for a National Diploma in Forestry, and also received an MPil in Zoology from Cambridge (UK). From 1974 to 2005, Dave was a technician and senior lecturer at Stellenbosch University. During that time, Dave was consulted on many projects, both in South Africa and the African continent. Currently, he is best known for hosting the television programme, Groen.