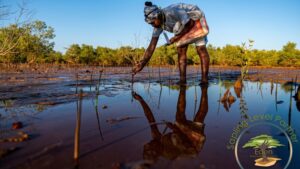 Eden Reforestation Projects (Eden) was conceptualized in 2005 when Ethiopia’s Prime Minister, Hailemariam Desalegn, invited Dr. Stephen Fitch to take over an abandoned nursery and forest restoration project along the Udo Escarpment near Hawassa, Ethiopia. Hailemariam Desalegn was then the President of the Southern People’s Region of Ethiopia. Dr. Fitch, who had personally seen massive tracts of land decimated by deforestation, accepted the Prime Minister’s offer and began developing and implementing what would eventually become Eden’s unique Employ to Plant methodology: provide sustainable employment to local people to restore and protect their natural environment. People from the local community at Gallo Argesi were hired as the workforce, and within the first year of operation, over 200,000 trees were planted. By the end of the project in 2012, over 15 million trees had been planted by over 3,500 Eden employees. By addressing the link between deforestation and extreme poverty, Eden has developed an effective model for reforestation. Its international efforts have since expanded into other continents and developing countries. Nurseries and reforestation projects with locally-hired employees have been established in Madagascar, Haiti, Nepal, Indonesia, Mozambique, Kenya, Nicaragua, and Honduras. Since its establishment, Eden has planted more than 583 million trees across its project nations, with approximately 20 million trees added each month. Eden’s global restoration network is creating livelihoods for millions of people living in extreme poverty by empowering them to restore and protect forests on a massive scale.